Daniel Tammet Can Recite 22,514 Digits of pi From Memory

From Scientific American: Daniel Tammet can recite 22,514 digits of pi. He holds the European record for such a feat. So, I guess there is a competition? The article covers an interview with Mr. Tammet in which he discusses memory and I.Q. tests. 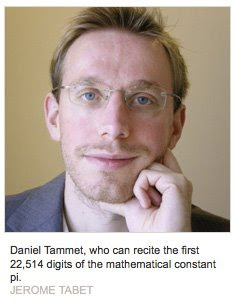 As I peruse the internet I am fascinated with the many different ways people spend their time. How long did it take Daniel Tammet to memorize that many digits of pi?

Typing pi to 22,514 digits in a continuous (no spaces) stream, in a Word document with smaller than average margins, using Times New Roman, size 12 font, single-spaced, would take 5 or 6 pages of paper.

It is indeed a great resource to obtain information on this subject. Keep posting. Thanks.
mba

Very funny. I hope you are talking about him and not me.