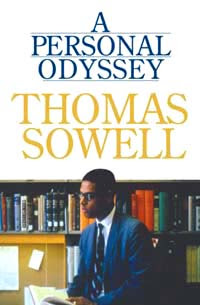 I felt vindicated when I read Thomas Sowell's autobiography.

Any teacher who considers rigor to be important, who has been tormented by students who want the good grade but are too lazy to work for it, who has felt pressured to compromise his or her standards by 'politically correct' but misguided administrators, who has been bullied by parents who think their children are little gods and goddesses, will appreciate Sowell's perspective on education.

The mediocre and poor teachers in the system, who are soft on rigor and give easy 'As', are the educators that no one complains about. It is a pity that so many people, probably the majority, would rather get a meaningless 'A' than really learn something but have to work for it. It is delightful to read about an educator who had the courage to stand by his principals instead of bend to the pressure of just about everyone.
Posted by MathChique at 1:30 PM