I found the article Green Guru in a facebook post. It is from the publication First Things: The Journal of Religion, Culture and Public Life and was posted on February 2, 2009 by Stephen M. Barr.


"...if no one had more than two children, as the green guru would want it, the fertility rate could probably not be gotten above 1.4. In twenty generations the world population would plunge to less than 2 million."

To see how the basics of population growth works, see the illustration above. It is representative of the growth of a fictional family over a 100-year period, following the rule, mentioned by Mr. Barr, that a couple limits itself to begetting 'replacements' and thus has only two children.

The first couple, Andrew and Alana are born in 1900 and have two offspring, Brian and Bertha, around 1925. The family reproduces according the the 2-child rule for the rest of the century. Anyone familiar with rudimentary mathematics, sees the structure of '2 to the nth power' (an exponential function) as the basis for the population growth in this example. Alas, people die. The names in lavender, represent people who have perished.

To compare the fictitious example to real life examples, we can look to the CIA who keeps statistics on population growth throughout the world. Their definition of Population Growth is as follows:


The average annual percent change in the population, resulting from a surplus (or deficit) of births over deaths and the balance of migrants entering and leaving a country. The rate may be positive or negative. The growth rate is a factor in determining how great a burden would be imposed on a country by the changing needs of its people for infrastructure (e.g., schools, hospitals, housing, roads), resources (e.g., food, water, electricity), and jobs. Rapid population growth can be seen as threatening by neighboring countries. 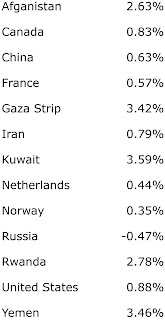 "Judging from remarks that colleagues have made in my presence, there are a remarkably many otherwise intelligent people who agree with the green guru that it is irresponsible to have more than two children, and who pride themselves on having stopped at two, as though they were benefiting society thereby. I suspect that this widespread attitude, based on an elementary mathematical error, may be one reason for the woefully low birthrates in economically advanced countries."

Oh really Mr. Barr! I think you might want to rethink your analysis.
Posted by MathChique at 5:48 PM 2 comments:

Verizon Math Fail - Why I'm No Longer With Verizon

You really have to see this! I especially love it when the manager explains that her incompetence in math is a 'difference of opinion'.

The gentleman's response to Verizon.

Posted by MathChique at 9:24 PM No comments:

Dave Murray, in his blog Head of the Class, urges those of us who are interested in education to keep track of President Obama's campaign promises regarding education.

Mr. Murray has sifted through 510 campaign promises from PolitiFact.com and found 37 that involve education. He has posted them to Head of the Class.

Thank you Mr. Murray.
Posted by MathChique at 10:42 AM No comments:

Quote of the Week

Regarding the 'Dark Ages' in the last post, this editorial quote is in reference to a Texas school board's decisions regarding 'science' education.

"The lesson we draw from these shenanigans is that scientifically illiterate boards of education should leave the curriculum to educators and scientists who know what constitutes a sound education."

Posted by MathChique at 10:10 AM No comments:

Emerging from eight years of the second coming of 'The Dark Ages', our nation has hope. But the information in the article "Study Sees an Obama Effect as Lifting Black Test-Takers" in the New York Times, is misleading. The article doesn't provide enough information for us to know the circumstances that surrounded the exams, let alone how educators might use the study to help close 'the achievement gap' in schools. 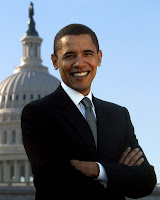 "Now researchers have documented what they call an Obama effect, showing that a performance gap between African-Americans and whites on a 20-question test administered before Mr. Obama’s nomination all but disappeared when the exam was administered after his acceptance speech and again after the presidential election."

For example, were the researchers comparing students from the same neighborhood, with the same family income, whose parents had the same level of education? In other words, are all variables the same except for the fact that Barak Obama is now President of the United States?

The educators and teachers, who I know, are working overtime, on their lunch hour, after school, and in the evenings, to help close the 'achievement gap'. It would be a miracle if all that were required was for the teacher to march around the classroom with a placard of Barak Obama, chanting "remember our President", and presto! no 'achievement gap'.
Posted by MathChique at 9:05 AM No comments: