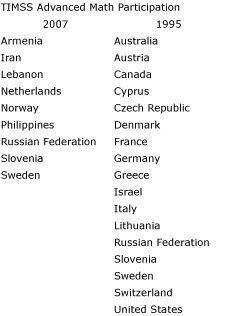 Thank you to Patsy Wang-Iverson for a corrrection of my last post.

The quote of Reprentative George Miller, Chairman of the Education and Labor Committee, in his opening remarks in the hearing to review the National Math Panel Report is as follows:

"This administration deserves credit for convening this panel. However, at a time when we need strong leadership in bolstering the fields of math and science, it is extremely disappointing that this administration recently decided to withdraw the U.S. from participation in the Trends in International Mathematics and Science Study, an international exam given to high school students who take advanced placement math and physics courses.

We will not be able to make the well-informed policy decisions needed to keep our nation on the cutting edge of innovation and discovery if we can't measure the performance of our students against the performance of students in other countries. I hope that the administration will reconsider this misguided decision."

According to Ms. Wang-Iverson the U.S. still participates in TIMSS at the 4th grade level, (It is interesting that math education, in the U.S., see declines, relative to other nations, starting in middle school, and steep declines in high school), and TIMSS was suspended at the advanced level for the following reasons:

1. no funds
2. none of our economic competitors was participating [[but isn't it interesting both Russia and Iran participated?]]
3. harsh criticism was levied at the end of secondary study last conducted in 1995

At the top of this post is a list of countries that participated in the 2007 and 1995 TIMSS. There are two glaring facts (aside from the U.S. not participating in 2007): There are no East Asian countries on either list, Only the Russian Federation, Sweden, and Slovenia are in both lists. It is hard to get an accurate international comparison when China, Japan, Korea, Singapore, and Viet Nam are not on the list.

Ms. Wang-Iverson, informed me that she worked very hard towards having the U.S. participate in TIMSS, to no avail. I have sent an email to the Executive Director of the International Association for the Evaluation of Educational Achievement (the oversight organization for TIMSS), Hans Wagemaker, to inquire about lack of participation in TIMSS. I will report if I hear back from him.

Meanwhile, my search for information on TIMSS has resulted in my first post on Wikipedia. It is regarding the history of TIMSS and why you may find that the "T" stands for "Third" or "Trends", depending on the article.
Posted by MathChique at 9:28 AM No comments:

In April 2006, George Bush commissioned the National Mathematics Advisory Panel to investigate why the U.S. continues to drop in rank in world standing in regards to math education and make recommendations on how to redevelop the nation's competitive edge in mathematics education. On March 13, 2008, the Panel released the report of their findings.

The House Education and Labor Committee held a Full Committee Hearing to examine the National Mathematic Advisory Panel's report. The Committee heard testimony from members of the Panel and on Wednesday, May 21, 2008, released that testimony, in written and video form.

Representative George Miller (D - CA), Chairperson of the Hearing, said in his opening statement that the Committee was going to focus on two areas of the Panel's report. One: Raise math standards and revise curriculum to include fewer topics explored at greater depth. Two: Provide teachers with better training; teachers can't teach what they do not know.

The "Wow! You've got to be kidding!" moment came when I heard Rep. Miller state that George Bush was suspending participation in the next Trends In Math and Science Study (TIMSS). TIMSS is one of the main tools used to provide reliable data on the mathematics achievement of the nation's students compared to those in other countries. TIMSS data has been collected in 1995, 1999, 2003, and 2007. TIMSS 2007 results will be released on December 9, 2008.

The main motivation for forming the Math Panel in 2006 (a good idea from Bush!) was about how to improve the nation's competitive edge in mathematics in the 21st century global economy. The U.S. ranks 25th out of 29 developed nations (not good) for 15 year-olds in mathematics education, unacceptable especially in view of the international leadership status of the U.S. TIMSS was one of the necessary tools used by the Math Panel to compare the nation's math education to that of other countries.

Although Rep. Miller said he was disappointed that Bush had suspended participation in the next TIMSS, he did not give a reason for Bush's decision. I can only wonder: Perhaps the NCLB Act hasn't been as successful at the Bush Administration purports.
Posted by MathChique at 10:34 AM 2 comments: