The Relationship of Perimeter to Area 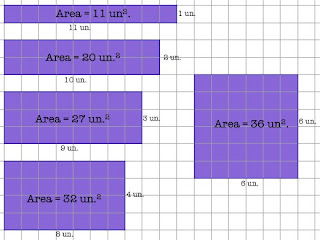 In answer to the Perimeter-Area Quiz from last week:

To the left is an example where the perimeter of the rectangles remains a constant length of 24 units. The area increases as the sides of the rectangle get closer in length to each other.

Both examples show that the maximum area of a rectangle, relative to its perimeter, occurs when the rectangle is a square.
Posted by MathChique at 12:03 PM