The Case of the Unknown Perimeter 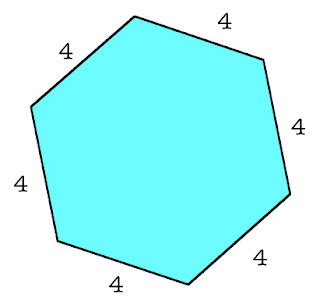 The Program for International Student Assessment report ranks American 15-year-olds 24th out of 29 in math among developed countries (see Education Next article).

Let’s see what that looks like in the American classroom. Recently, my Geometry students had a question in their textbook:

What is the perimeter of a regular hexagon with a side of 4 units. There was a picture, like the one on the left.

Some of my sophomore students had trouble with this problem because they didn’t know what perimeter meant. This is troubling because the concept of calculating perimeter, and the use of the word perimeter, are introduced in California in the 3rd grade math curriculum and are then reinforced in the 4th, 5th, 6th, 7th, and 8th grade curricula. They have worked on the concept of perimeter for seven years before entering my classroom.

When new math terms are introduce in classes, I talk about the roots of the words so that the students can connect mathematical terms with English terms. In this case, peri- means around and –meter means measure. Therefore it is curious that the students didn’t understand the question.

As I dug deeper, it became obvious that the students didn’t know what it meant to “measure around” something. I wondered if these particular students had ever held a tape measure in their hands let alone actually measured a room to calculate its area.

California started eliminating or changing vocational courses in schools years ago. Sewing, wood shop, cooking, drafting, and art, have been replaced by other courses. In the public school in Northern California, where I last taught, the cooking room was turned into a Cisco lab, the sewing room was turned into a computer lab, the drafting room was turned into administrative offices (during the school remodel), and the photography lab was moved to an area that floods in the winter rendering it useless. In any number of these “hands-on” courses, mathematical concepts, that would otherwise be abstract such as perimeter and fractions, have context, making them cognitively more accessible to the student. I’m not going to argue against computer classes but I believe that the gap, for some students, is in having a hands-on experience with math.

In the recent National Math Panel Report it is suggested that there are too many topics in early grades, that there should be fewer topics covered more thoroughly. I agree with the Panel, depth has suffered and useless topics are included in the math curriculum (7th grade students in California learn about Stem and Leaf Plots, a topic that I, with a degree in mathematics, had never heard of until I taught 7th grade math). We skim over topics without giving student the depth of understanding necessary to retain them. The result is 10th grade Geometry students who don't understand the concept of perimeter. Perhaps the Powers-That-Be should also be looking at reintroducing some of the enrichment programs that, at one time, were options in education in the United States.
Posted by MathChique at 10:20 AM

Wow! I expect to have to remind my elementary students what perimeter means, but surely the definition ought to stick by the time they're in high school. I hadn't thought of blaming math illiteracy on the decline of practical shop and home ec classes, but you may be onto something. I wonder if anyone has ever researched that.

I certainly agree that Stem and Leaf Plots are ridiculous when students can't handle the basics.