California: Algebra for all Eighth Graders 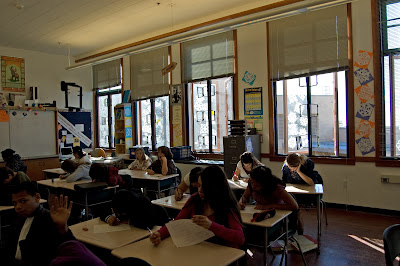 As often occurs, California policy makers have gotten it wrong.

Research has shown that students who successfully pass Algebra in middle school are more likely to enter higher education. Algebra has been labeled a "gate keeper" to higher education. Apparently, success in Algebra in the 8th grade, rather than later, is the number one indicator of whether a student will proceed to college. So, what is wrong the policy that requires all 8th grade students to take algebra? In quaint terms, this policy places the cart before the horse.

The reason a student is successful and passes algebra, no matter the age of the student, is that the he/she has a fluent understanding of some basic math concepts that support taking algebra. In other words, it isn't that the student takes algebra in the 8th grade... the success of the student depends on the fact that he/she is READY to take algebra in the eighth grade.

There are districts in California that have a "no fail" policy, also called "social promotion", in elementary school. In other words, whether or not a student understands essential curriculum, he/she is promoted to the next course until, voilà, the student arrives in an 8th grade algebra class without knowing:

Yet... the powers that be think that such a child is going to have more success in the future just for the reason that he/she is taking algebra in middle school when, in fact, it is the opposite. A child will be successful in algebra BECAUSE he/she has mastered a fundamental amount of mathematical thinking BEFORE taking an algebra class.
Posted by MathChique at 7:38 AM